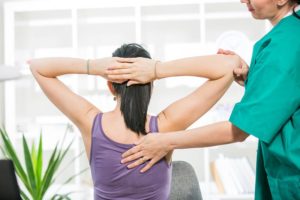 Many clients will possess postural distortions or imbalances which greatly impede their ability to safely and effectively engage in a comprehensive exercise program. Postural imbalances can impair joint function and stability, compromise coordination between bodily segments, increase energy demands during completion of any given task, reduce force transfer through the kinetic chain, and increase the overall risk for injury (among other negative effects). In some cases the distortions impede neural signaling which impacts proper activation causing movement compensations which lead to injuries.

These postural issues may arise from a number of factors associated with activities of daily living (ADLs) as well as recreational endeavors or sport participation. ADLs that promote postural inefficiencies are often related to repeated occupational or social habits, such as slouching in front of a computer while at work leading to pelvic instability. Among more athletically-inclined clients, common causes of postural distortion may include performing repetitive actions that lead to overdevelopment or overuse issues, previously engaging in poorly-devised weight training programs, being improperly instructed on proper exercise technique, and movement compensations with or without the presence of an injury. In any case, distortions create localized dysfunction which may extend across the kinetic chains. They often present with pain as well as reduced skeletal function and performance. Forward shoulders will likely cause impingement syndrome, an example of localized dysfunction. Whereas, IT band syndrome developed from gait changes associated with a lateral pelvic tilt would be an example of an interactive disturbance.

Assessment of posture can be easily accomplished by using a plumb line to observe variations in anatomical positions. A plumb line aligned to the side of a client should run vertically through the hole of the ear, acromioclavicular joint of the shoulder, central vertebral bodies, the greater trochanter of the hips, slightly anterior to the midline of the knee, and end at the heel through the lateral malleolus of the ankle. Variations to this posture suggest a possible consequence in static posture and movement. If a plumb line is not available or a trainer is not proficient in identifying the anatomical locations, other observational assessments can be employed to discern postural issues as will be detailed later.

Certainly genetic predisposition may increase one’s propensity toward postural deviations, but in general, afflictions are usually developed over time. And while acute responses may trigger problems; in most cases they are brought on by chronic behaviors.

We truly believe that nobody deserves to live in pain, even as they age, and we will do everything we can to ensure that our patients are comfortable.